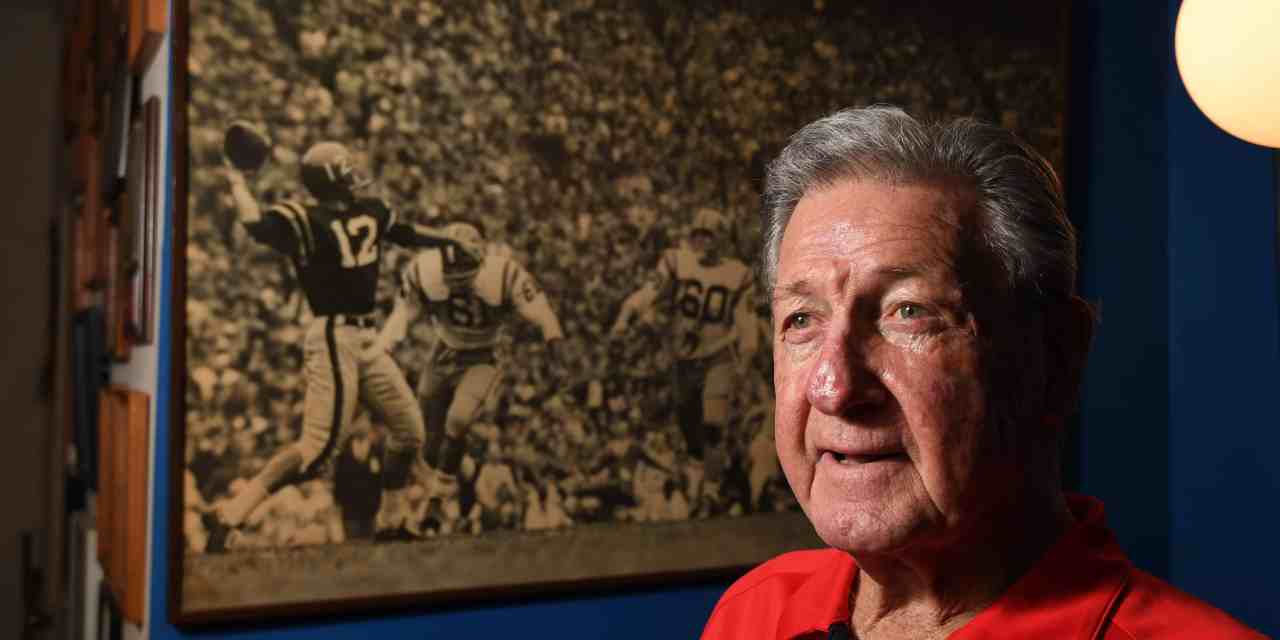 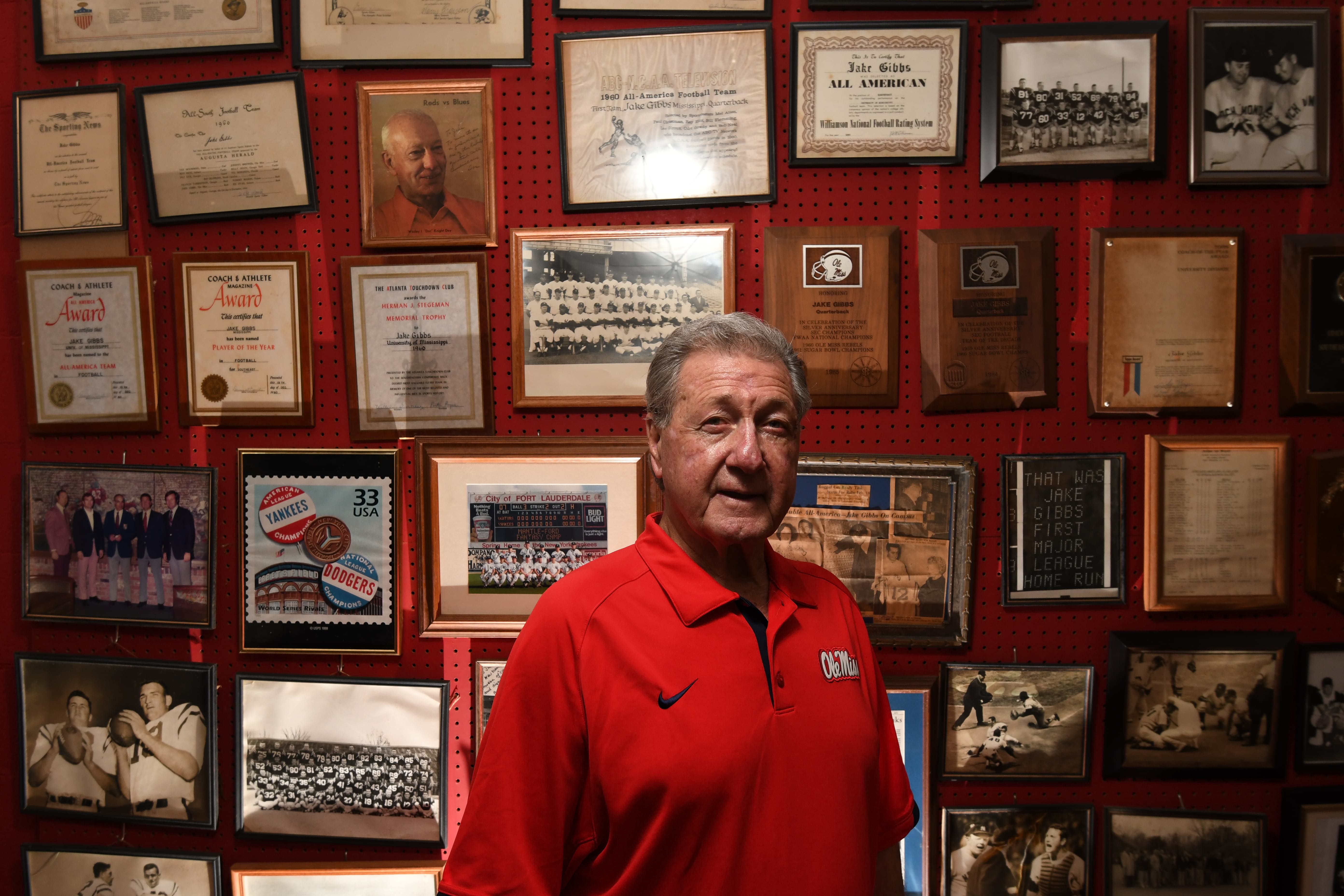 THE BASEMENT THAT JAKE BUILT

The incredible life of Ole Miss sports legend Jake Gibbs, as told by the walls beneath his home

It’s not the room.

It’s the memories, united in one special place that houses a lifetime of legends and unforgettable moments, all tied together with a single thread: Jake Gibbs.

Yet the basement wasn’t part of the plan.

After an 11-year career in professional baseball, most of which were with the New York Yankees, Gibbs — an All-American quarterback and star baseball player at Ole Miss — returned to Oxford in 1972 to coach the baseball team. Gibbs and his late wife, Patricia, decided to build a two-story house on the west side of town because they were used to living in a similar-sized home with their three sons in New Jersey.

It wasn’t until builders graded out the lot that Gibbs found out his new home would be a little deeper than expected.

“It just fell naturally to have a basement,” Gibbs says. “I never counted on a basement until we created the lot.”

The extra room brings to life the career of one of the greatest athletes Ole Miss has ever produced.

Gibbs starred in both sports for the Rebels in the late 1950s and early ‘60s before spending all of his big-league years with the Yankees, and there aren’t many significant moments from that time that he doesn’t have chronicled in his basement. The walls are covered with framed pictures with hardly any room to spare. Dozens of baseballs covered in signatures of former teammates and players are gathered on a table near the recliner. Sitting on the coffee table is a humidor former Yankee teammate Mel Stottlemyre gave him because he knew Gibbs liked cigars.

“We decided later that we’d just make this an Ole Miss room and a Yankee room, and that’s how it all got started,” Gibbs says. 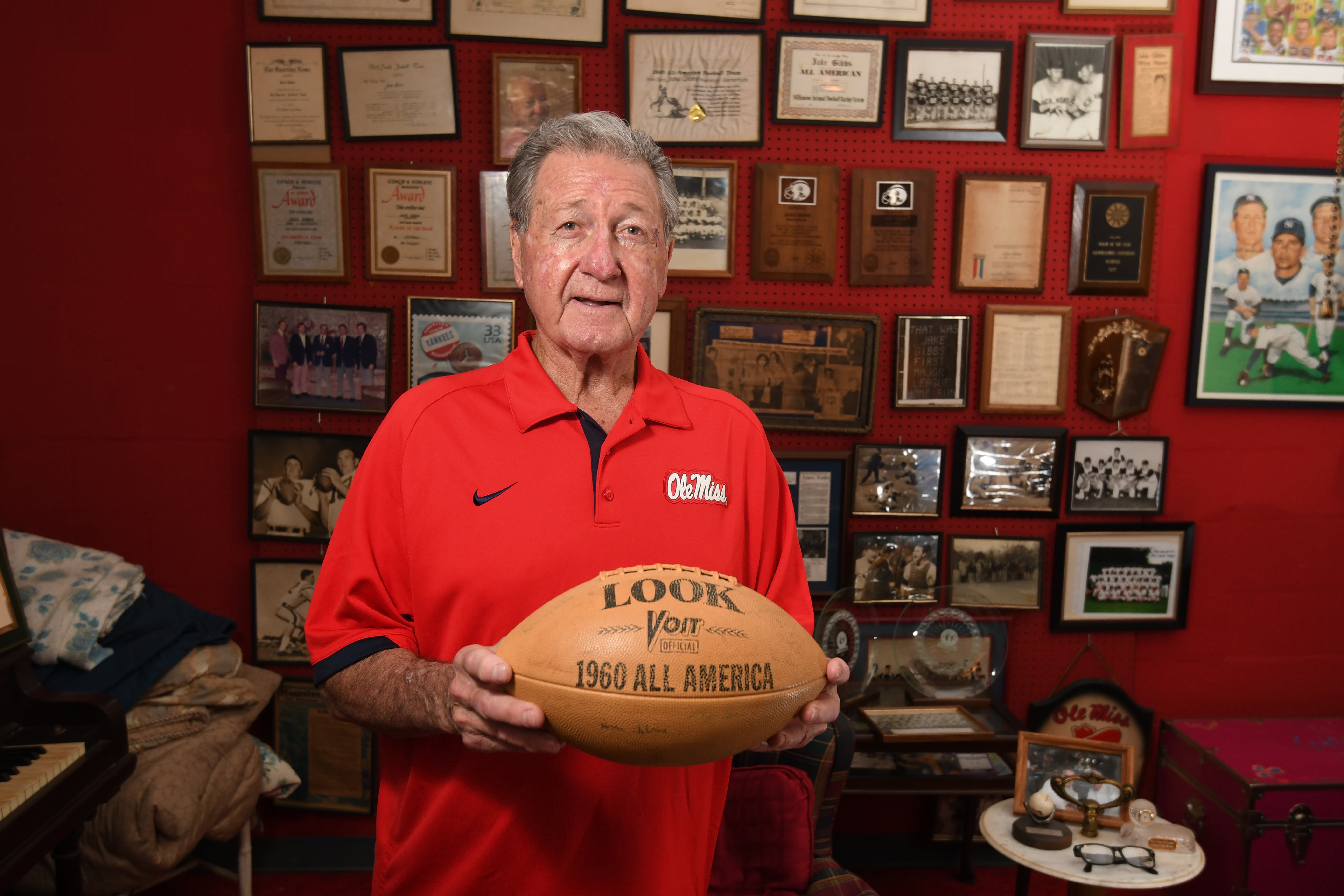 No detail was too small. Gibbs went to a local Sherwin-Williams and asked for paint that most closely resembled Ole Miss’ official colors, painting three of the walls navy blue with a red pegboard wall rounding out the room. The bright red carpet matches the steps on the spiral staircase leading into the basement.

“This is supposedly the Ole Miss navy, and this is the Ole Miss red,” Gibbs says, pointing, “and it’s been that way for a long time.”

Each old photo Gibbs recalls brings with it a vivid memory of the past.

A quarterback for the late Johnny Vaught, Gibbs helped guide Ole Miss to 30 wins in three seasons and two national championships while going back and forth with Georgia quarterback and future NFL Hall of Famer Fran Tarkenton as the SEC’s most productive player (Gibbs led the league in total offense as a junior while Tarkenton beat him out his senior season). On one wall is a sketch by artist Jim McQueen featuring Gibbs as one of the best quarterbacks in Ole Miss history alongside Charlie Conerly, Doug Elmore, Jimmy Lear, Glynn “Squirrel” Griffing, and Archie and Eli Manning.

Gibbs might as well be back on the practice field when he explains another subtle detail in the drawing. He, Conerly, Elmore, Lear and Griffing — all of whom Vaught coached — are holding a football neck-high, which is no coincidence.

“That’s what Coach Vaught taught,” Gibbs says. “When you come out from that center, that’s where he wants your hands right there. Now all you’ve got to do is take it back and throw it.”

Hanging in a frame on another wall is a clipping from what Gibbs guesses is a decade-old issue of Sports Illustrated ranking the top 50 college quarterbacks of all-time. With those two national titles, a .925 winning percentage and a third-place finish in the 1960 Heisman Trophy voting (Archie and Eli are the only other Ole Miss players to ever finish that high in the voting), Gibbs came in at No. 8, something he calls a “nice honor” but again doesn’t think the recognition should be that exclusive.

He’s got a point. That 1959 team Gibbs quarterbacked makes a strong case as the best Ole Miss team ever, outscoring opponents 350-21 on the way to a 10-1 record.

“We only gave up 21 points that whole year. It’s hard to comprehend,” Gibbs says. “So I think it’s the national championship, the SEC, winning percentage — I think a lot of (the SI ranking) is based on that. I had teammates that helped me on that, so it’s not an individual honor. Nothing ever is.”

High on another wall is a photo of Gibbs standing alongside Vaught and former athletic directors Warner Alford and Pete Boone while receiving his plaque for induction into the College Football Hall of Fame. Some of his fondest baseball memories at Ole Miss are captured in a photo of old Swayze Field when the Rebels hosted the SEC’s first-ever four-team tournament in 1977 and beat Mississippi State, along with one of Gibbs and Vaught, then the athletic director, holding the championship trophy after Gibbs’ team beat Florida twice to win the title.

“No restrooms and a little old tiny scoreboard,” Gibbs remembers about the stadium, which also didn’t have lights back then. 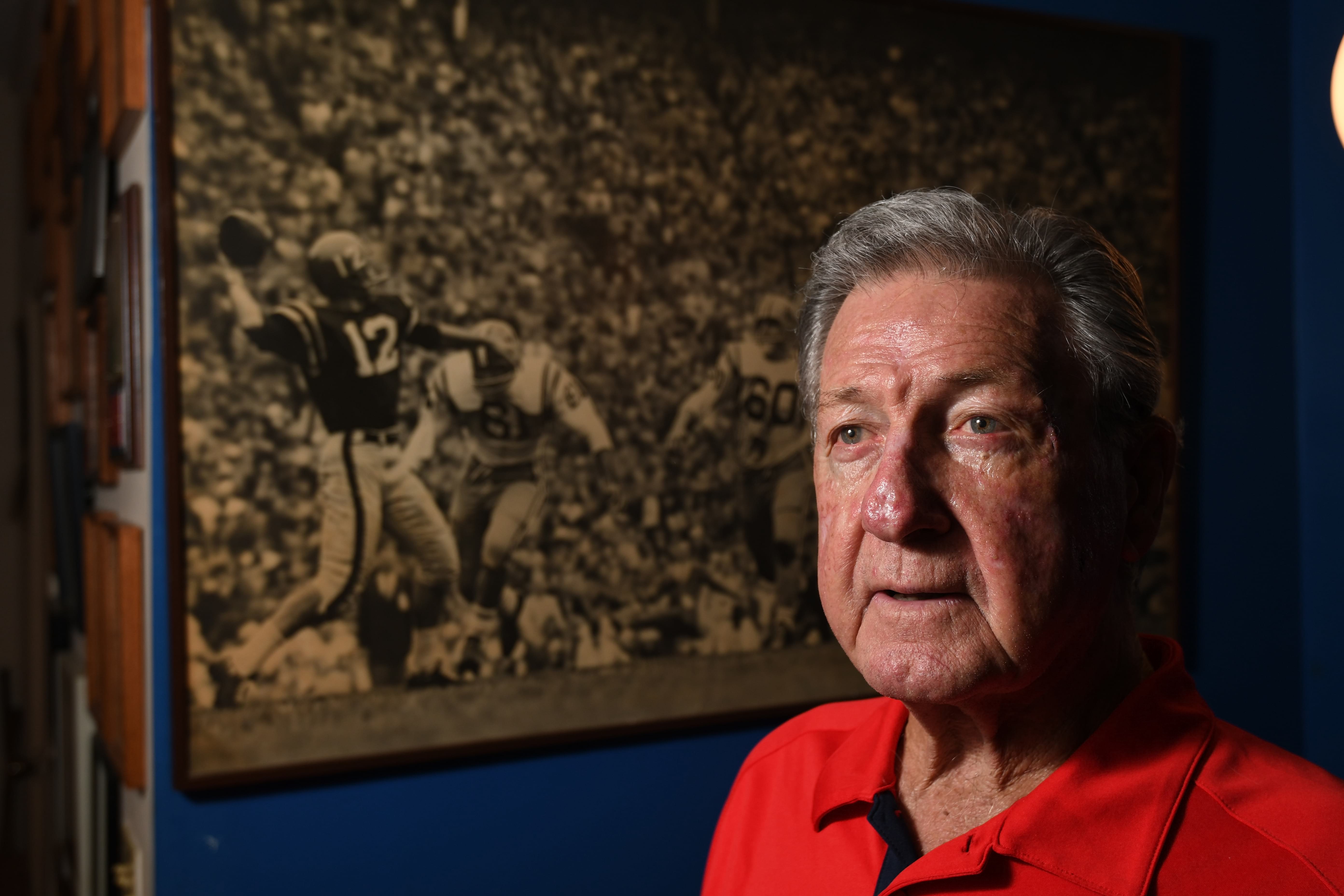 But Gibbs’ most vivid memory of his time at Ole Miss is captured in the biggest photo in the room. It’s from the 1960 Sugar Bowl against LSU where Gibbs gets off a 43-yard touchdown pass late in the first half just before getting hit.

Gibbs refers to it as “the revenge game.” He was the one who punted the ball on Heisman winner Billy Cannon’s famous Halloween night return earlier that season that lifted LSU to a 7-3 win, the Rebels’ only blemish that year. The Tigers never found the end zone the second time around as Ole Miss won 21-0.

Gibbs says it’s purely coincidence that the photo is larger than all the others, but there’s a story behind that, too.

“This picture was hanging in the old student union building,” Gibbs says. “When they renovated it, somebody from the university took these pictures and put them outside. Somebody called Warner and said, ‘Warner, do you realize there’s a picture over here that you might want to keep?’ So Warner goes over there and gets this picture, and he calls me and says, ‘I’ve got something that you should have to put in your house.’ Warner is the one that went and picked it up and gave it to me.”

Gibbs chose baseball over football out of college and says he spurned offers from the Dodgers, Cubs and others to sign with the Yankees because he wanted to keep winning.

“I had that choice, and a lot of it came back to being an Ole Miss Rebel and the days we had here in football and baseball,” Gibbs says.

“You get used to winning, and you don’t want to go to anything else.” 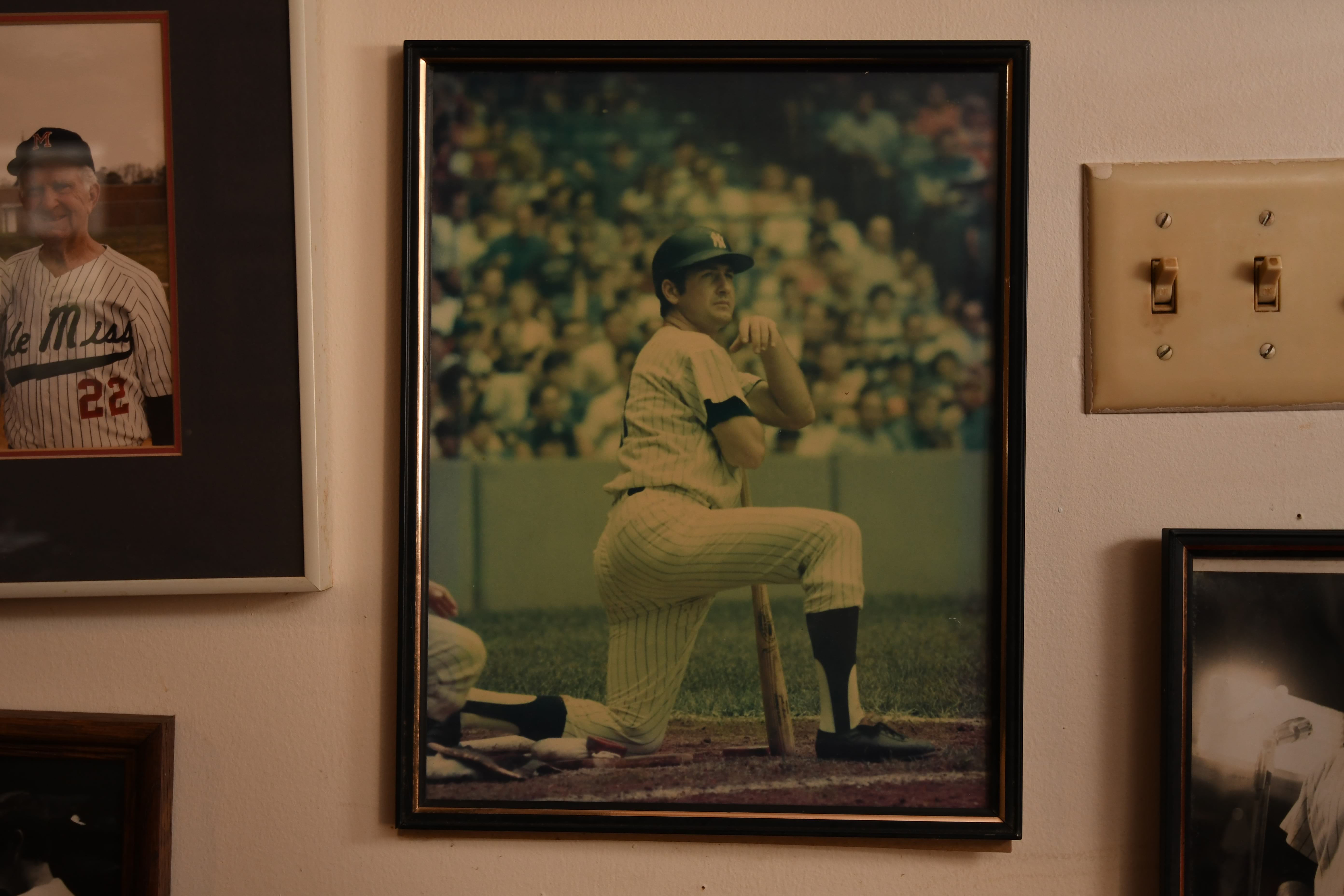 In a wooden frame hanging from the pegboard is the box score from Gibbs’ first Major League game on Sept. 11, 1962, at old Tiger Stadium, a debut that was memorable for a couple of different reasons. With the Yankees trailing 1-0 in the eighth inning, Gibbs came on as a pinch-runner and was the potential tying run at third when a one-out fly ball was hit to Detroit right-fielder and future Hall of Famer Al Kaline.

“I’m starting to think, ‘If you ever run fast, by God you better run now,’” Gibbs says. “That’s what’s going through my mind. I slid in and beat the throw.”

Below that is a photo of an irate Gibbs and equally as miffed manager Ralph Houk yelling at plate umpire Larry Napp during the Yankees’ game at Minnesota late in the 1970 season, though Gibbs laughs about it these days. Gibbs, who was moved from the infield to catcher early in his career, was adamant he’d tagged out another future Hall of Famer, Harmon Killebrew, trying to score on a base hit only for Napp to call him safe. The Twins won 3-0, but Gibbs recalls Killebrew coming clean after the game as the teams left the stadium.

“(Houk) met Killebrew walking out, too, and Houk says, ‘Harmon, just for the hell of it, were you out or safe?’ He said, ‘I ain’t touched home plate yet,’” Gibbs says with a laugh. “That (umpire) was telling me, ‘If I’ve ever made a correct call, I made that call correct.’ And Killebrew says, ‘I was out. I never touched home plate.’ So that’s the story behind that picture.”

Mantle and Ford invited Gibbs to Fort Lauderdale, Florida, to take part in their first fantasy baseball camp as a Yankee Oldtimer in 1985, a gesture Gibbs still calls “quite an honor.” He’ll never forget meeting Berra, who helped bring Gibbs along at catcher before calling his Hall of Fame career quits after the 1963 season. “Yogi kept up with sports,” Gibbs says. “He knew I’d played quarterback at Ole Miss, the teams we had and that I signed. He knew all about me, and he said, ‘It’s about time you got here.’ I always remembered that, that a guy of his stature would say that to a rookie that just signed with the Yankees.”

Gibbs says it was “very special” when his hometown of Grenada honored him with Jake Gibbs Day on April 15, 1961, but for him, nothing tops the three pictures hanging next to each other from Sept. 22, 1971. On the same day he played his final game in the bigs, the Yankees shocked Gibbs with their own Jake Gibbs Day.

The first photo shows Houk presenting Gibbs with a portrait of himself that Gibbs has hanging upstairs; the one in the middle shows Stottlemyre presenting Gibbs with that humidor; and the one on the end shows Gibbs giving what he calls “my little five-minute talk” in front of the tens of thousands in attendance at Yankee Stadium. Gibbs spent the last eight years of his career mostly platooning with Elston Howard and Thurman Munson and finished as a .233 lifetime hitter, which makes that day just as surreal for Gibbs nearly 46 years later.

“The Yankees, I guess they looked at it different,” Gibbs says. “I guess I made them an everyday decent ballplayer, so they honored me with that day. You know there haven’t been a lot of days, so I’m very honored to be among those honorees. It don’t happen every year. I guess I was lucky.” 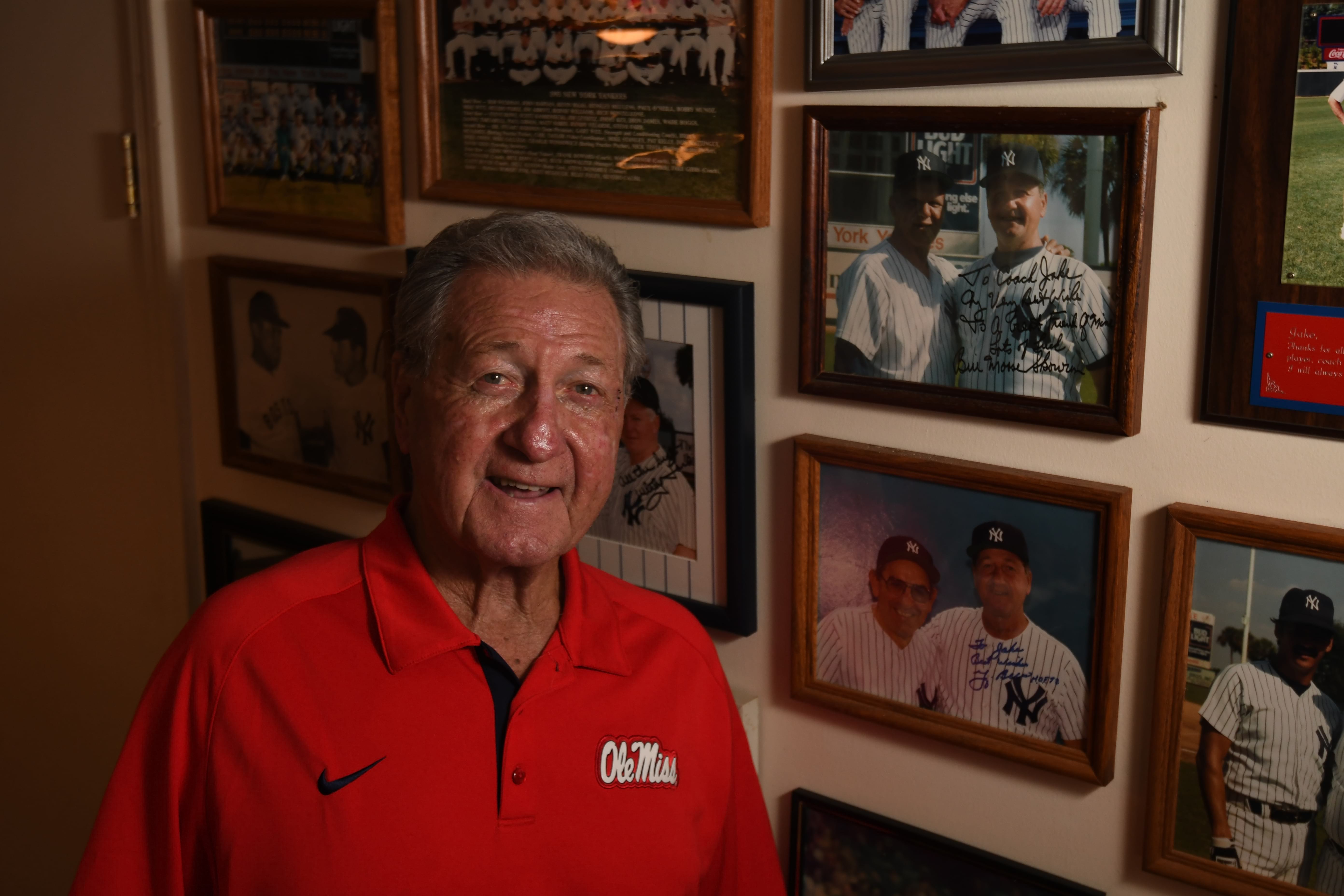 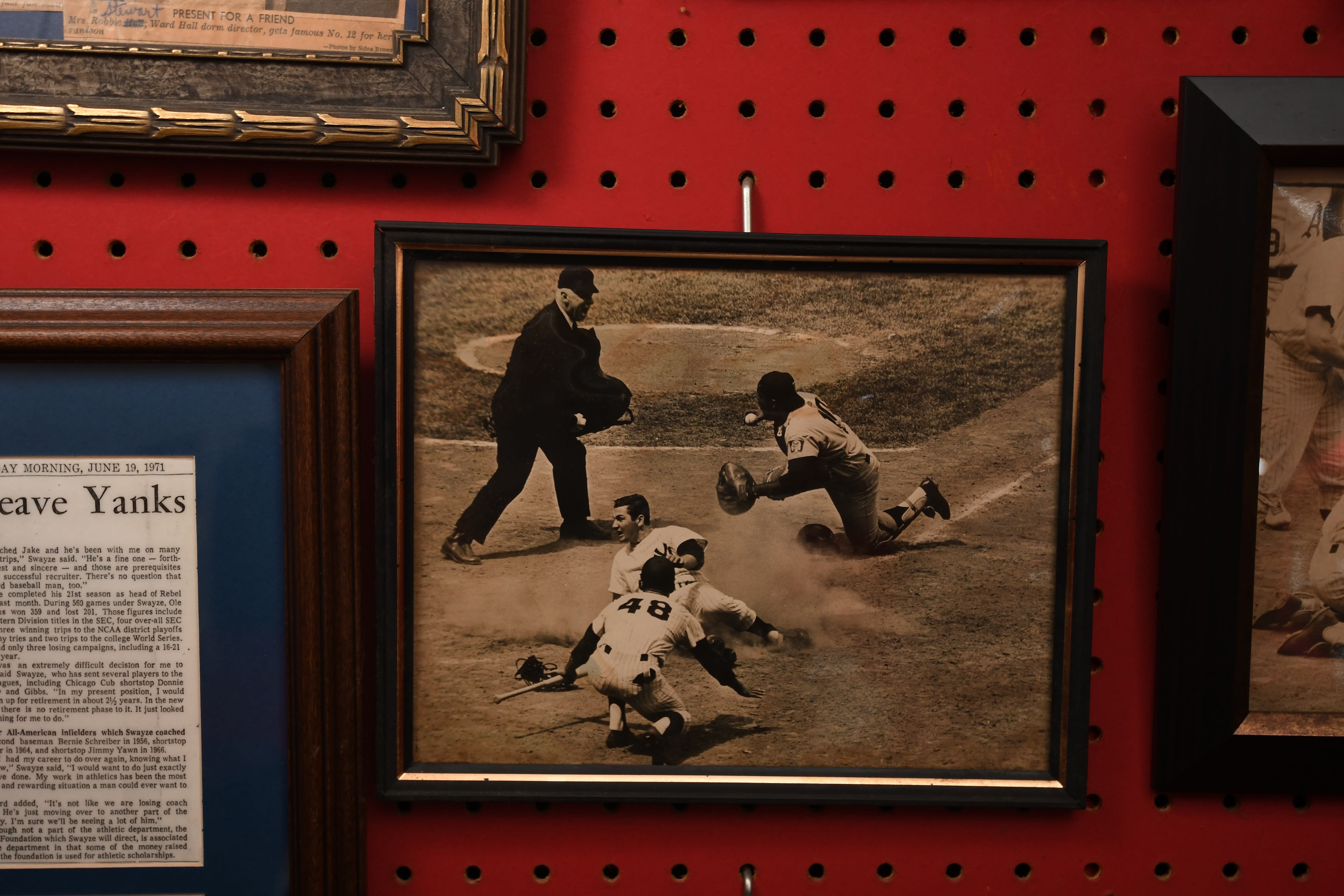 Gibbs doesn’t have to look at the photos to jog his memory. His playing days haven’t taken a debilitating physical toll on him. He’s had patches of skin cancer removed and figures he’ll have to have a hip replaced in the future, but he’s doing about as well as a 78-year-old former big-league catcher can be.

“I still have a pretty good memory believe it or not,” he says.

But Gibbs does wonder what will happen to all of his keepsakes when he’s no longer around.

He’s leaving it all to his sons, Dean, Monte and Frank, with his youngest, Frank, having already claimed that revenge-game photo. Whatever they don’t want might be donated to the Mississippi Sports Hall of Fame in Jackson or to Ole Miss, but Gibbs hopes that a museum at the school is also an option one day.

“We need an Ole Miss museum,” Gibbs says. “There’s too many ex-ballplayers that have got things like this that they would put it in there and let people see it.”

“When I was coming from Grenada High School, and being country, I never dreamed of doing something like this,” Gibbs says. “That never even entered my mind. I was lucky and glad to get a scholarship.

“It’s a lot of years of good memories, a lot of fun and friendship. That’s what really life is all about anyway.” 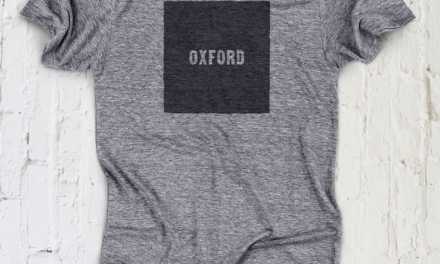 Stock up on gifts for everyone on your list 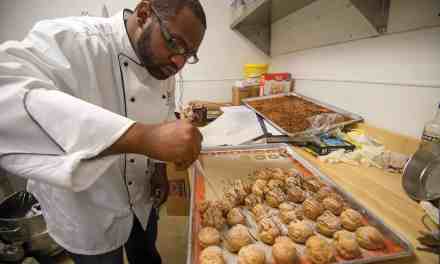